The other week for date night my hunny and I went to see the movie Arrival. It was a not very well advertized science fiction movie with Amy Adams. It was amazing! I loved it. I don’t do horror movies, and I find often Sci-Fi is mixed with horror. This one wasn’t. Pure Sci-Fi. And quite realistic I think of what would probably happen should we wake up and find 12 alien craft hovering over different parts of the earth.

It was fascinating and I resonated well with the main character Louise. She is a translator, and that’s how she got brought onto the project. There were not StarTrek like translator technologies. We had to learn to communicate with non humanoid aliens.

So a lot of the theme of the movie is based around the theory that language shapes your brain and how you see the world. Which has a ring of truth in it for me.

Yes we translate vibration into language, but the language we use does shape our world.

Pay attention to the things you say frequently and unconsciously. What swears do you use? Are there any of those old sayings that continuously slip out of your mouth? Language reflects our thoughts, and our thoughts are often entangled with our beliefs, and our beliefs are what we end up continuously vibrating out that creates our reality.

A belief is only a thought you keep thinking. And it can be changed. It’s often not the easiest thing to do, but it can be done.

If you are not manifesting things you desire in your life, if your life isn’t the way you want it to be, look at your beliefs. If you don’t have as much money as you desire, do you believe you need to work hard for money? What do you feel about rich people? Journalling around this can yield some surprising revelations. 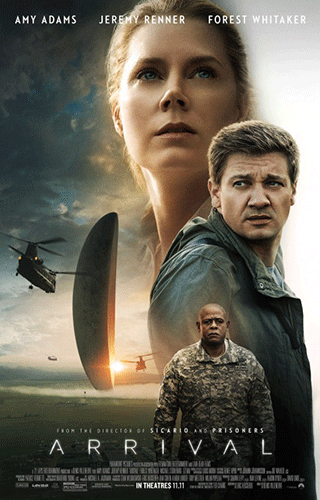 So back to the movie.

The alien language is unlike anything we’ve ever seen before, the visuals created for this movie were simply amazing. And once Louise learns and starts to understand their language, her brain and thinking does change.

How this affects her, leads to some seriously interesting consequences.

Time restructures for her.

Most humans perceive time as linear. We inherit this belief from our parents and other people around us when we are children learning to be in the physical world. However it is a self perpetuating belief.

It is linear because we believe it to be. Change your belief, and your perception changes.

When Louise learns enough of the Heptapod language to change her brain, she starts to see time differently. She is in some “memories” of the future as well as the past.

It’s all very confusing and fascinating at once, yet makes some serious sense to my brain, which has done some playing around the idea that I can change my perception of time and speed it up or slow it down for me.

She actually manages to get some information from her ‘future’ to help out in the present. Absolutely fascinating.

While in my intuitive work I’ve never been one who has interest in doing any “future prediction” stuff, this idea combined with the many worlds theory gives me warm fuzzies, and makes me want to ponder more.

There’s a tickling sensation of a story in those ideas for me. Hopefully this planted seed will germinate and grow.

I had an experience many years ago when I was first learning Matrix Energetics where in the practice sessions, the next thing we were going to learn showed up for me. It’s like I was in tune with time and getting glimpses of the future in the next 15 minutes.

How do you view time?

Is it linear or can it be changed, stretched, altered?

Stuck in some self sabotage?