Saying yes to our dreams

Did you know that roughly 80% of people don’t even think about having goals? I found this staggering! How many people are just surviving through their lives? Where’s the dreams? Where’s the reason for living? Where’s the things they want to accomplish.

I know we can all get stuck in a surviving rut from time to time. I’ve always found dreams and reaching for them is what helps me get out of those ruts.

We live in a universe based upon attraction. You get what you think about.

So what do you want? Really? You can have anything! You just gotta decide what it is. And yes go for the biggie. Get some smaller things in there too. “I want a new car. I want a nicer place to live. I want to have a cat again. I want to create some art.”

What is it that you want?

By going for things we really want, we lead by example, and this will often inspire others to do the same.

My previous big goal was that I’d been wanting to step into my business full time for years. I just kept putting it off and putting it off. It was never the “right time”. And then just before I left my day job, I kept seeing this same meme over Facebook. 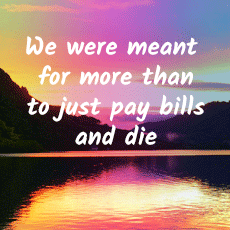 It said: “You were meant for more than to pay bills and die”. It took a few times of seeing it to really sink in. And then I said YES! YES to dreams! YES to big goals. YES to living my life the way I want to.

There was more to it than that, but that little thought was the essence of opportunity that triggered me into saying YES!

I had so many patterns that I was still carrying with me, that I didn’t know about when I left. I had no idea how many patterns of scarcity I was running. I’ve discovered them as I go, and I use my fantastic pattern clearing to shift them.

These patterns have been with me a while, decades in some cases. And they haven’t shifted over night, but they have shifted. I used to be bored 8 hours a day and resenting my “day job”. I felt undervalued, and like I was just a cog and nobody would even notice if I was replaced. I know that what I could offer outside of my roll in the company wasn’t valued at all.

So here’s the big opportunity for you.

If you want to:

shift through some patterns that are holding you back

seamlessly turn who you are, into who you dream to be

The book a connection call with me, and let’s see if we’re a good fit to get you where you want to go.

What I find really fascinating about the work I do, is that when someone is ready, we can shift away around 15 years of trauma and abuse patterns in less than half an hour. When someone is not really ready, I can be working on them for over an hour, and only have a little of their patterns shift.

Stuck in some self sabotage?